Sunday night going into Monday morning was the worst experience I have ever had with Mika. It was pouring at night and there was a thunder storm. It didn't really hit until about 4 o'clock in the morning. I woke to a little bit of rumble, but it was nothing dramatic... yet. A loud boom went off, followed by distant roars of thunder and flashes of lightning. Car alarms went off, my bedroom shook and Mika startled from her sweet puppy dreams jumped up and started barking.

She wasn't going to go back to sleep. No way, not after that. I tried to soothe her to let her know that everything would be okay. She jumped off the bed and started patrolling the room, pacing back and forth. After a few minutes I no longer heard her walking around the bedroom. I called out to her and didn't get a response. I sit up and turn on the light on my nightstand, looking around the room for her while my eyes adjust to the light. On the floor, laying next to two blankets and a pillow, she was trembling. The storm was still relentless and Mika never experiencing a storm before had no idea what was going on, all she could do was lay there and let her body shake involuntarily. I got up out of bed, picked her up and put her back on the bed, she curled up next to me and I kept petting her until she fell asleep.

This isn't a very clear picture since it was taken from my phone in the middle of the night, but here she is before I brought her back onto the bed. 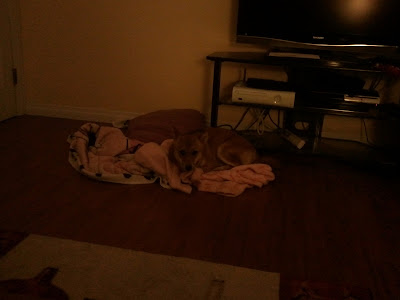 How do you doggy parents deal with things such as thunder storms when your beloved pet is scared?
Posted by Julie at 11:57 PM 3 comments:

I would have been lost raising Mika without the help of the Shiba Inu Forums & the Nihon Ken Forums. I learned so much about puppies and how to raise a healthy and happy pup. I never would have thought to pay for socialization classes for a puppy. I would have thought that visiting friends and their dogs would be enough socialization for any dog. Seeing as Mika is still a bit skittish of people, I'm afraid of what would have happened if I didn't put her through the socialization I did when I first got her.

The constant whines and nips of a puppy can make some people go crazy. A lot of people, not just myself turn to these support groups (forums) to find out if what they are doing with their puppy is correct. Even though it was less than a year ago that I started raising Mika as an 8 week old pup, I am still learning of new ways to approach different situations. Every dog is different, so things I did for Mika may not work for the new addition. So I spent the last few nights before bed watching playlists of helpful videos of Raising A Puppy and Playtime by Dr. Ian Dunbar.

I urge new puppy owners to visit Dog Star Daily and read the different texts that are available there. There is so much information to help owners who may want to give up and put their dog up for adoption. This is a way to help raise a puppy into a well behaved dog that can be your lifetime pal not just an out of control puppy waiting for a new owner to take on the challenge.
Posted by Julie at 4:07 PM No comments:

Lately there have been more and more posts on the different Shiba Inu related forums I follow and there seems to be more people looking to stud or wanting to breed  their dogs. Heck, there was even one where a litter was produced from a non-standard shiba that no reputable breeder would have kept in their breeding program.

It just saddens me that people want to breed their dogs because it's cute and fun. There is so much more responsibility needed when bringing dogs into this world. There are so many dogs in shelters because of irresponsible breeding. Many people who breed for fun do not do the genetic testing to make sure their dog is free of any hereditary diseases, or breed dogs with an unwanted temperament.That in itself causes most dogs to go into shelters because some dogs are so fearful and some owners do not want to take the time to train their dog and to socialize them to get passed their fears, which can cause aggression.

If anyone is seriously thinking about becoming a breeder, I suggest you do a lot of research about the breed, the hereditary diseases that are in the breed, and do the proper testing to make sure your dogs are cleared from any of the diseases that make vet bills break the bank. Proper testing is recommended at 2 years of age. Anything before that will be too early to tell.

I just want to also make a note that I will be adding a male pup soon, and yes he will be kept intact. He is not a Shiba Inu, but is a different type of Nihon Ken. He will be kept intact in hopes to improve the bloodlines here in North America and add genetic diversity to his breed. The Shiba Inu does not need anymore genetic diversity as there are many of them in rescues looking for great homes.
Posted by Julie at 3:14 PM 10 comments:

Somehow Mika has developed an addiction for pinecones. I think it all started at the Nihon Ken Long Beach Meetup. There she saw Ichigo, fellow Shiba Inu, chew on a pinecone and Kurenai, Shikoku Ken, also chew on a pinecone. Before that meetup she would walk by pinecones everyday and never stopped to think about picking it up.

Since the meetup, whenever she sees a pinecone she has to grab it and trot around with it in her mouth. I really need to get a video of her when she's walking proudly with a pinecone in her mouth. It is the cutest thing ever.

Anyone else with dogs that love to carry something in their mouth while they are on their walks?
Posted by Julie at 12:40 PM 3 comments:

Weekend at the Dog Parks

We usually only take Mika to the dog park once a week. If there isn't a LA/OC Shiba Inu Meetup going on, then we will usually take Mika to Fullerton Pooch  Park on Sundays to meet Shaina and Ari. However, Mika got a treat! Kevin took her to Irvine's Central Bark Saturday morning, and we also took her to see Shaina and Ari on Sunday at Fullerton Pooch Park.

Mika still acts like a puppy and still has the energy of a puppy. I'm not sure if she will ever grow out of her puppiness, but I don't really want her to either! I love that she is so social and loves to be around other dogs. The down fall is that she doesn't realize when a dog is telling her to back off! I always have to try to redirect her to another dog or pull her attention away. Nope, she is relentless, if she has her eyes set on a certain dog that she wants to play with, she doesn't care! She will jump up on owners if they are holding their dog cause their dog is afraid of Mika (who could ever be afraid of her?). I've tried letting her get snapped at by other dogs so she can start to learn the body language of other dogs, but she still doesn't get it. I'm really afraid for her sometime, so I always have to watch her to make sure when the other dog has had enough and physically pick up Mika and give her a little break before putting her down again. That usually will break her focus on a dog and let her roam around til she finds another playmate.

Here are two videos from each dog park this past weekend. The first one is from Central Bark. Sorry for the ending, I was a bit too lazy to edit it  :) The second video is at Pooch Park and you also get a glimpse of Ari in the video. The owner of the dog Mika is playing with, didn't really like the way they were playing. Not sure why the owner felt uncomfortable. I personally think she played wonderfully with the other dog.

Yes! There is such a thing as Doggy Daycare! Doggy Daycare is awesome, not only is someone watching your dog for you while you are not there, they get to socialize with other dogs, and play all day long! A dog playing for hours on end equals a tired dog at home! A tired dog means a non-destructive dog, which makes owners happy!

This was Mika's second time at Wags & Wiggles Daycare. The first time she went to daycare was when Kevin and I went to my nieces, Elise & Chloe's Birthday at Disneyland. We weren't able to watch her on the Doggy Cameras (yes they have live feed of the daycare!) on our phones, so we were always curious what she did at daycare. We've taken her to dog parks and after a while she just hangs out and walks around the park, but she is never at the dog park for more than 2 hours. She was at daycare for at least 8 hours so we were hoping there wouldn't be any separation anxiety, which we doubt she would have anyway since she loves other dogs.

So why the second time? I was going to be in Corona all day and I didn't want to leave Mika home alone, even though she has proven that she is trustworthy to be left alone. We had a free pass for daycare from Mika's graduation from Obedience Level 1, so we figured we might as well use it for today. Kevin dropped her off on his way to work and I logged on to watch her on the doggy camera before I left to Corona. Throughout the day we were watching the doggy camera to see how Mika did. She had a lot of fun playing and wrestling with other dogs. Embarrassing moment for us though is when we saw her jump up on two different daycare attendants. Apparently one of the attendants was holding onto another dog, a dog that Mika wanted to play with. So she jumped up to try to play with the dog. Ah, geez I'm just glad she isn't a 100 lb dog where that would be very dangerous, but it's still a bad habit. I'll need to work harder on training her not to jump when she wants something.

Overall Mika had a great time at daycare, she was able to let out all that energy that little shibas have! Right when she got home she passed out, she woke up to eat dinner, but not the entire thing. That is a sign that she is really tired! This girl is very food motivated and loves to eat, and her not finishing her dinner is shocking!

Here are some screenshots Kevin took of Mika at daycare from the doggy camera. 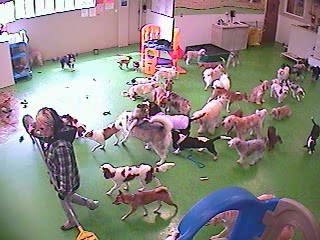 Here are some pictures of the aftermath of daycare!

So, I just imported Mika's blog here. I decided that I just want to have one blog instead of having two, or three. So this blog will now be about me and my life. That includes the Inu, so don't worry you will still be seeing some Inu updates here!
Posted by Julie at 1:29 AM 1 comment: