The Importance of Research

My heart is aching for poor Wrinkles. Wrinkles is a 12 week old Chinese Shar-Pei that my BIL's brother(s) (he has too many brothers so this entry might get confusing) had bought. He is the cutest little thing with all his wrinkles (hence the name Wrinkles).

When I first saw him, I noticed that his left eye wasn't opened. He couldn't see out of his life eye very well and had felt very uncomfortable when he first was introduced to Mika and Kyuubi. I saw how run and hide so I put Mika and Kyuubi in my office and went out to give Wrinkles some treats. I heard that he wasn't eating much so I wanted to see if he would take some Stella & Chewy's freeze dried patties from me. At first he wouldn't take it from my hand so I put pieces on the ground, and slowly he started eating it. Slowly, but surely he started taking the treats from me. After an hour or so we reintroduced the dogs one at a time to Wrinkles. He and Kyuubi hit it off very well (there's a video of them playing together in my last post).

Amy, who is taking care of Wrinkles, is my BIL's younger brother's (not the brother who purchased Wrinkles) girlfriend, and they have taken on the responsibility of caring for him although they did not purchase him. They are both very new at raising a puppy and were pretty scared that his left eye was completely shut and having puss form around it. I scheduled a vet appointment for them yesterday afternoon to get him checked out since Wrinkles did not have his first vet appointment yet. I was intending on staying at work, but Amy was going to go alone to the vet and was a bit scared. She asked me to accompany her and so I went with her and Wrinkles to the vet.

12 weeks, weighing in at 20 lbs! He was such a good boy when being handled by the vet tech. Even got his nails trimmed without a struggle. Only problem was, they couldn't see his eye. They took him to the back and put some numbing medication on his eye to see if they could open it and take a look. Turns out his eyelid was curled all the way down. Poor guy has entropion! The vet told us that he has a very severe case of entropion and referred us to an ophthalmologist.

Amy wasn't expecting to care for a dog anytime soon, especially one she did not research and want herself. She is now caring for a dog that someone else purchased because they do not know how to care for him or take time off from their lives to feed him, play with him, put the drops needed in his eye. I am just upset at the irresponsibility that I witnessed these past few days with Wrinkles. I am glad that Amy has stepped up to help take care of him, but she shouldn't have to.

Before taking Wrinkles home, my BIL's brother had asked the breeder about his eye. The breeder shrugged it off and said it will go away. I told them they need to contact the breeder and let them know what is going on with Wrinkles. I read through the contract that was sent with Wrinkles. Funny thing is, there's a spot for the "seller" to sign, yet no signature. There isn't even a number to call and contact the breeder. Only way to contact is via e-mail. I hope they can get things settled with the breeder.

This morning Wrinkles was brought to the ophthalmologist. They didn't do the corrective surgery, given he is very young, they didn't feel like it was needed at such a young age. However, they did put him under and pulled his eyelids back out and stapled them. They are hoping that he will eventually grow into them and that having the staples out will get rid of his infection and he won't need the corrective surgery in the future. The staples will stay in for they are hoping 2 weeks, however the ophthalmologist said there's a chance he will need to have the staples in for a few months. 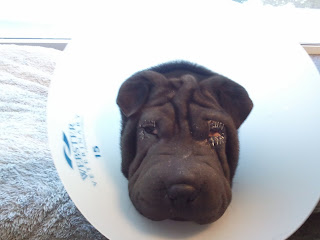 The poor guy is only 13 weeks old and is already in so much pain. He is going to lose out on the important socialization window. I wish there was more I could do to help, but I can only keep trying to spread the word about researching breeds that one may be interested in and then researching breeders. It is so important to find a breeder that will be there 24/7 for support.
Posted by Julie at 3:41 PM