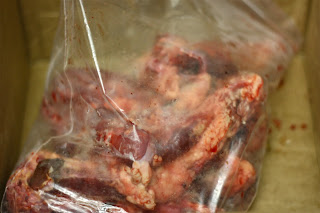 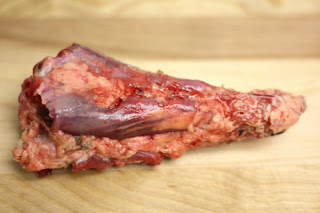 I finally opened the box of ostrich tails that I purchased from Creston Valley Meats. The tails are in a big ziplock bag with about 7 pieces of ostrich tail in it. Right when I opened the bag the pups came running into the kitchen sniffing out the new raw item on their menu. Needless to say they were excited and trying to jump all over me trying to figure out what I'm attempting to take out of the bag. I carefully took one out, probably with a look of disgust on my face, something about tails didn't sit right with me, but I knew the ostrich tail would make a great RMB for the pups. Sucked it up and put it on the cutting board to snap a picture of the pup's treat that evening. I mean, how often do dogs get to eat an ostrich tail? The first piece I grabbed is one of the smaller pieces in the bag. It is about 1 1/2 inches in width (at the widest part of the tail) and about 4 inches in length. A pretty decent size and definitely not a choking hazard. Even though I have been feeding raw for quite some time now, each time I give them something new I am a bit cautious, especially when it is a bone item. I wan to make sure they are able to gnaw and chew on the bone without hurting themselves. I usually do not have a problem with Mika since she chews her food and doesn't swallow or gulp down her food (unless she gets a boneless meal). Kyuubi, on the other hand, will try to swallow things sometimes so I have to be careful with him. I was glad the pieces were big enough that I did not have to worry so much about him trying to gulp the entire tail. 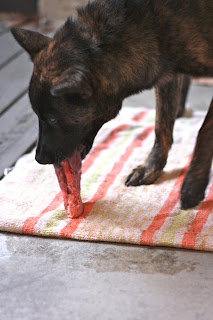 First pup to try the ostrich tail was Kyuubi. I laid their raw towel out on the patio and put the ostrich tail down on it. He immediately jumped onto the towel and sniffed out the ostrich tail. A few licks and then he started to try to chew the meat off the bone. He doesn't like using his paws so it was a bit difficult for him to rip the meat off the bone. He slowly started to chew the bone with the meat attached. He was happy when I came up and held the ostrich tail for him to chew on. He had the most satisfied look on his face while crunching away at the tail. He got a good chunk of the bone off and so I rotated the tail to a meatier side so he could get some of the meat. He ripped off pieces of the meat with his teeth and it helped a little since I was tugging on it a bit when he was getting a grip on the meat. Since this was a new item I did not let him eat very much of it. I wanted to make sure he would digest the tail perfectly fine before feeding him an entire tail as a bone-in meal. He did just fine with the ostrich tail and will probably get it later on this week as an evening meal. The tail is quite boney and I would most need to give him an organ meal in the morning before hand. 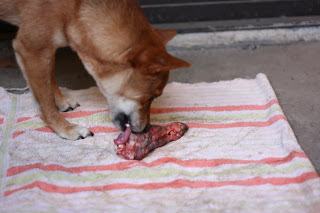 Now it's Mika's turn. I figured she would do just fine with the ostrich tail since she's been on a raw diet for almost a year now. She does what she usually does when she gets a RMB. She sits excitedly waiting for me to put it down for her. After putting it down and giving her the "ok" to go for it, she slowly walks up to it, sniffing the ostrich tail. Slowly, she starts to lick it, trying to figure out if she really wants to snack on it. She also doesn't like to use her paws on RMBs so after a while I come save the day again and hold the ostrich tail for her. She immediately opens her mouth and gets the tail in between her molars. She knows exactly what to do when wanting and needing to crunch up bone pieces. I felt more comfortable with her eating the tail than I did when Kyuubi was eating it. She chews the bones thoroughly before swallowing it. Mika has always been good about eating bones and has never thrown up any of the RMBs she's eaten. After a while I remove the ostrich tail and put it back into it's ziplock bag with the other tails. Unfortunately, Mika scared me a bit after eating the ostrich tail. She was hacking a bit 30 minutes after eating some of it. This is the first time she has showed signs of wanting and needing to throw up after having something bone-in. 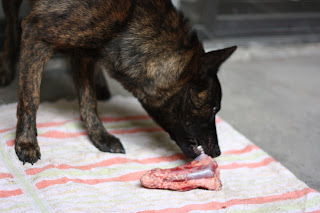 Kyuubi's rating of the ostrich tail? Best RMB he's had to date! He is tired of the boring chicken cuts and the pork neck. 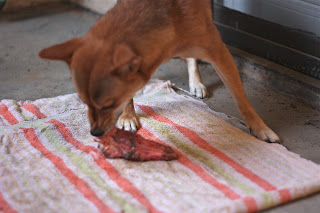 Mika's rating of the ostrich tail? Loved it, but probably won't be having it very often. I will try it again with her to see if she can handle it better than she did the other night.

As for me, I will probably purchase ostrich tails again when I run out. Kyuubi did very well with them. It's also another protein that they get that is different from the normal cuts that I can easily get at the supermarket. Oh, another plus? It's only $.60/lb. Yeah, I'll definitely be getting these again in the future!
Posted by Julie at 8:17 PM