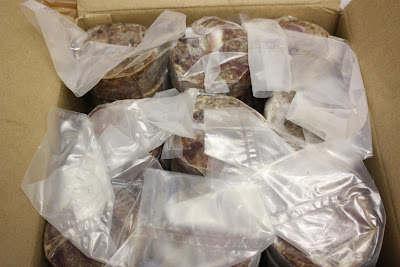 So what exactly is R-T-C-SG? Well that's the abbreviation that Simon from Creston Valley Meats uses on one of his new mixed Raw Dog Foods that he offers. It stands for Rabbit, Tripe, Chicken, and Stomach Grass. He started getting an abundance of rabbits and wanted to lower the cost with rabbit mixes for his raw feeding customers so had sent out an e-mail asking us what we would like to see it mixed with. He usually sells whole rabbits for a little bit under $2.00/lb and cleaned rabbit in patty form for about $4.00/lb. He made the mixture so that it would be easy on our pockets. 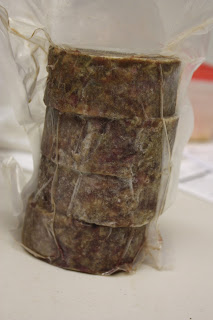 Not only was the price for R-T-C-SG a selling point for me, which was $1.65/lb, but it was also the fact that they came in patty form! Each patty is around 5 oz, and well if things are in patty form it makes portioning the food for the day much easier! I have gotten stuff from Creston in the past where it was just in a gallon zip lock bag and I had to just estimate how much each scoop was that I was taking out of the bag. It was also a lot messier in a regular zip lock bag. The convenience of the patty form definitely sealed the deal for me.

R-T-C-SG comes with four patties per pack, and about 9 packs per box. For Mika this would last her about 6.5 weeks. However, she doesn't get this everyday. Although not listed there is a big of organ mix in there, I only recognize it because I've gotten the organ mix before and there are parts of livers and kidneys in there very visible, especially since it is full rabbit and chicken mixed in. The organ content in R-T-C-SG is a bit too much for Mika to be eating this everyday, so that's why she gets once a week and it's usually following or will be followed up with a bone-in meal.

While everything raw has bit of an odor to it, I like this mixture better. It does have tripe in it which is awesome for the dogs, and it doesn't have the disgusting smell that tripe gives off on it's own. I'm not going to say that this smells good, because heck, what raw food smells good? But the smell is tolerable compared to tripe! Hopefully we will see these back up on Creston Valley to make another purchase. Mika loved it, and I'm sure Kyuubi will love it too when he's put on a 100% raw diet.